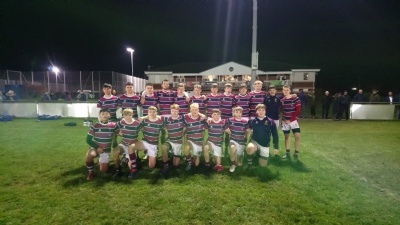 King’s march on to last 16 of National Cup

King’s School first XV advanced to the last 16 of the Natwest Vase competition with an emphatic away win against Newcastle-under-Lyme School on Friday night in Stoke. King’s arrived at the game in confident mood having won 4 games this season and only one defeat to blot the copy book - a narrow defeat by 15-19 to Queen Ethelburga’s College. The game was played under floodlights which, combined with the large crowd in attendance, created a wonderful cup atmosphere.

Newcastle-under-Lyme started on the front foot, pinning King’s back into their own half for the first 10 minutes of the game. King’s defence remained resolute and steadfast knocking back wave after wave of attack with strong tackles from the likes of Clink and Cadby. On the 11 minute mark King’s finally broke into the opposition half and clinically took the lead when Shennan picked up from the back of a ruck and cruised over for a try. This seemed to dampen the home side’s spirits and 6 minutes later, after some excellent work from the forwards, C Tweedie crashed over with another pick and go, this time from close range. King’s were finally into their groove, producing some excellent attacking rugby and looking dangerous every time they had possession of the ball. Now the back were getting in on the act too. The hardest of hard lines ran by Jenkins resulted in him punching yet another hole in the Newcastle-under-Lyme this time making it over the try line. Hawkins converted his 3rd kick in a row of the evening to make it 21-0. King’s then tried the more subtle approach, going around the outside rather than through the middle. Excellent handling from the backs led to a passing move that spanned the entire width of the pitch before eventually landing in the hands of M Fairlie (Year 11) who showed talent belying his years to step around his opposite number and score in the corner. 26-0 at the break. The game meandered in the 2nd half with neither team able to gain dominance. Newcastle-under-Lyme did eventually score halfway through the 2nd half but King’s had the last word with another wide attacking move that led to D. Stokes scoring under the posts. All this means that King’s are still on course for the final at Twickenham. The next round will be played week beginning 18th November.